You are here: Home > The Hotel > History

The History of West Lodge Park

The Beale family have owned and actively run the hotel through four generations from 1945, and West Lodge Park has the highest AA quality rating of any four star hotel in the North London area. Over the past 70 years, we have hosted many weddings, events, conferences to name a few. Please see below snap shot of our history. You can read about the hotel in more detail in our History Book.

A wooded deer forest of about 30 square miles, in the area Barnet/Potters Bar/Enfield/Southgate which belonged to the kings and queens of England. Queen Elizabeth enjoyed hunting here.

Keepers were needed to stop people poaching the deer and cutting down the trees. To house them, three lodges were built - East and South Lodges (now disappeared) and West Lodge, re-named West Lodge Park in 1924. West Lodge was probably built in the 1400s - it was certainly mentioned in 1540.

An important minister, Secretary of State to Charles II, he lived at West Lodge and was visited there in June 1676 by the writer John Evelyn who wrote a favourable description of the place in his diary. Henry Coventry's portrait hangs in the hall at the foot of the main staircase and John Evelyn's diary extract is attached.

View our interactive map – originally created by John Rocque, who was a surveyor and prominant cartographer of the time.

The Dukes of Chandos

In the 18th Century the lst, 2nd and 3rd Dukes of Chandos were Chief Rangers of the Enfield Chase though their main residence was at Canons, Edgware, and used West Lodge occasionally. A portrait of the lst Duke hangs in the Chandos Room.

By this time the original purpose of the Chase had been lost. A lot of the oak trees had been felled, the deer had disappeared and much of the land had been turned into farmland. The old house became dilapidated, and was rebuilt. The sections of West Lodge around the entrance hall and over the reception area date from this time. It is believed that the panelling round the main staircase, which is dated around 1600, was salvaged from the old house and re-used.

A Private Family House until 1924

For nearly a century West Lodge was used as a family house by various families, including the Cater and Mosely families, who retain old photos of those days. In 1916/17 it was used briefly as a rest home for nurses during the First World War.

Mr North Lewis took a lease of West Lodge, built the part including the Lancaster Room (which was used as a dining room) and several bedrooms above, and opened it in 1924 as a private hotel. Most of the guests were elderly people living in retirement as permanent residents, but a few rooms were kept for chance guests. The hotel had its own pack of hare hounds. The atmosphere was generally sedate and respectable.

Beale's Limited Buy the Hotel in 1945

Edward Beale bought the house in 1945 and moved there with his wife Betty and son Trevor. For a few years the general quiet style of the hotel was maintained. In 1958 a change of policy was introduced no more permanent residents were catered for, a licence was acquired and a bar installed, the standard of cuisine was raised and central heating and private baths installed. Banqueting was also encouraged.

Edward Beale took over a ten acre field previously sublet to a farmer in 1963 and began an ambitious scheme of tree planting, with professional design. Since then more trees and shrubs have been added until there are now over 800 different varieties. The arboretum has attracted considerable press publicity and is officially recognised by the Plant Heritage for its Hornbeam and Swamp Cypress national collections

After the grant to Beale's Ltd of a 99 year lease in 1969, a major expansion was completed in 1972 with the construction of the West Wing, including a new restaurant, bar and 20 bedrooms, and the North Wing, including a boiler house, stores and 8 bedrooms.

1995 marked the 50th Anniversary of the acquisition of West Lodge Park by the family business of Beales Ltd. In this time the hotel has grown in stature and importance, with the granting by the AA and RAC of four star status, the development of the banqueting and conference business including the new conservatory development, the upgrading of the bedrooms to luxury country house standards and the development of the restaurant with a rosette for good food. Three generations of Beales have worked here: Ted Beale, his son Trevor, who started the successful series of classical concert evenings, and Andrew, general manager 1995-1999.

2005 marked the 60th Anniversary of the Beale family's involvement with West Lodge Park. In the past decade the hotel has had further improvements, with the development of 11 5-star bedrooms in Chestnut Lodge, the extension of the Cedar Restaurant, and the addition of the Edward Beale room and Bedrooms 35 and 36. Furthermore Ridge View staff accommodation and Estates workshops have been added.

The hotel is now the highest rated 4 star hotel in North London, Hertfordshire and surrounding counties at 4 star 2 Rosette 80%. Chris Hall is General Manager and Andrew Beale is Managing Director.

What has not changed is the rather old-fashioned ideal of running a hotel to please its customers, while treating the staff with respect, and caring for the environment. After leasing the hotel for 67 years, the Beale family purchased the freehold to the hotel in 2012 securing the future of the hotel for our guests, our staff and the family for many years to come.

Ashley (24), Emma (22) and Dominic (19) are all involved in various ways – Ashley has graduated in hospitality at Bournemouth University and has worked a year at Hotel 41 in central London, the highest rated hotel in the capital, with 5 red stars. Emma has embarked on a management development programme with the company, and Dominic is now full time as a chef in the WLP kitchen.

I hope this brief history is of some interest to our guests and our staff.

For more information, please email westlodgepark@bealeshotels.co.uk
or call a member of our team on 020 8216 3900. 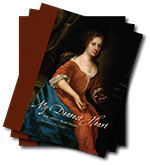 This is the newly launched stunning biography of Mary Beale by Penelope Hunting – we have copies for sale at WLP reception for £25, or by post for £30 inc. p&p

For a beautifully printed full colour copy of the History of West Lodge Park, Click here to buy online!

Alternatively, please send a cheque for £8.50 payable to West Lodge Park to:

and don’t forget to include your name and address.

The book will be sent by return of post.

Read what our happy customers have to say about our hotel.

I hope you had a good Christmas.
I wanted to say a massive thank you for yesterday. We had an amazing time. The staff were wonderful…

I want to thank you and the team so much for putting together ***** and ***’s beautiful wedding - it was truly a very special day . Please say…

Thank you so much, everything was spot on and there were a lot of compliments from guests on the food, hotel and ambiance. There were a lot…